Welcome to this new blog of mine, and let’s start with some big news.

Pathom 3 is on the way, and its a rewrite! In this article I’ll highlight the motivations for a Pathom rewrite, and what you can expect from the project development in the following months.

What is the primary abstraction of Pathom?

A lot of Pathom discussion is around resolvers, and that can make you think they are the main driver, but that’s not the case.

Pathom was built on top of the Om.next idea of parsers. I wrote in length about using that method to write parsers in a previous article I wrote.

For a recap: the original design was based on scanning the AST, filling the response, one attribute at a time.

The connect idea emerged after and was included as an extension to the system.

Here is a bit of how connect evolved:

I created this reader to try the connect idea; it was used in production only for a short amount of time.

This reader is very eager; it process resolvers as it sees then, there is no planning, it can get stuck in circles and also unnecessary calls paths that lead to dead ends

This reader will walk the index to figure which resolvers it needs to call to reach one given attribute, considering which data is available now.

This is the planning part. This reader can plan for a single attribute; the generated plan is a sequence of resolvers to call.

When parts of the plan fail, the planner tries to calculate a new plan until there are no more possible paths.

Because its per attribute, this still fits well with the parser design. However, this also requires some mutable state to cache the resolvers’ results between multiple attributes.

Uses the same planning algorithm of the reader2. By calculating the “provision” of a plan (which attributes will be available after the plan is complete), Pathom can spawn parallel processes to handle different query segments at the same time.

This reader internals are quite complicated due to this synchronization step that needs to happen when new data is available.

Given it still uses the parser abstraction, the code that generates the final result is unnecessarily complicated to match the designs.

Also, due to the coordination overhead, this reader tends to be more resource-consuming. It only improves the parsing speed when the user has big queries that can take advantage of parallelism.

This is the most recent (and still under development) reader. Instead of doing a plan calculation per attribute, this new reader uses a planner that considers all the attributes simultaneously and generates an execution graph of all possibilities ahead of time.

These are some of the advantages of this approach:

When we consider the way this reader works and trying to fit on the parser, it is just a lot of unnecessary things going on.

Later in the article, I’ll refer to this as Pathom 3, but note this is also available in Pathom 2.

In Pathom 3, this will be the only available planning/runner.

After pc/reader3, it became clear that the parser abstraction is more getting in a way than it’s helping these days.

And that’s what’s happening on Pathom 3, there are no more readers or parsers, and connect is now the driver of operations.

You can expect new plugin extensions to cover situations that were previously handled by readers.

In Pathom 3, the new planner plays a more significant role in the process; everything related to query scanning should happen at planning time now. For example, to decide which fields have partial data (due to sub-query) and need processing, the planner will provide this information, so the runner is simplified.

The new defresolver has a compatible API with the previous one, but it is also getting some “toppings” to make it sweeter:

Pathom now can infer the input part of a resolver from the user destructuring expression in the arglist. For example:

That’s a lot of data in that meta, now with implicit inputs you can remove the input declaration and let it be infered from the destructuring, as:

If you provide ::pco/input, it will use it instead of inferring.

Another thing you may have noticed that inputs are now vectors (instead of sets like in Pathom 2); this is to make everything consistent, so now input, output, and params all use the EQL format.

Another common pattern in Pathom is to create a resolver that outputs a single property (like our previous example), to avoid the map repetition you can use a keyword after the meta map:

The meta map is optional; in this example, we removed it since we don’t need anymore, but you can add it before the :acme.person/full-name to add more meta to the resolver.

The arglist on defresolver is also different, since in our full-name example we don’t need env, we can omit it:

In case you use a single argument, it is always the input. To use env, you must use two arguments

Also, in case you don’t need input too (global resolvers), you can write simply as:

Resolver get a record type

In Pathom 2, the resolvers were plain Clojure Maps. I changed that to a type, which gives these new properties for them.

In Pathom 2, to call a resolver, you had to retrieve ::pc/resolve from it and then call, now with the type, it implements IFn which means you can call the resolver as a normal function

Which means this is now a thing:

Another issue with ::pc/resolve is that when the user needs to send the index across the wire, having an fn as part of the data is the most common problem I see that throws errors during the transit encoding.

The new type can implement the transit protocols to encode itself properly without leaking the resolve part.

To test the minimum cost of doing a minimal relevant operation with Pathom, I made a setup to run just one resolver. Consider this resolver is very lightweight, so the time spent in this benchmark is how much Pathom adds in time by its internals. 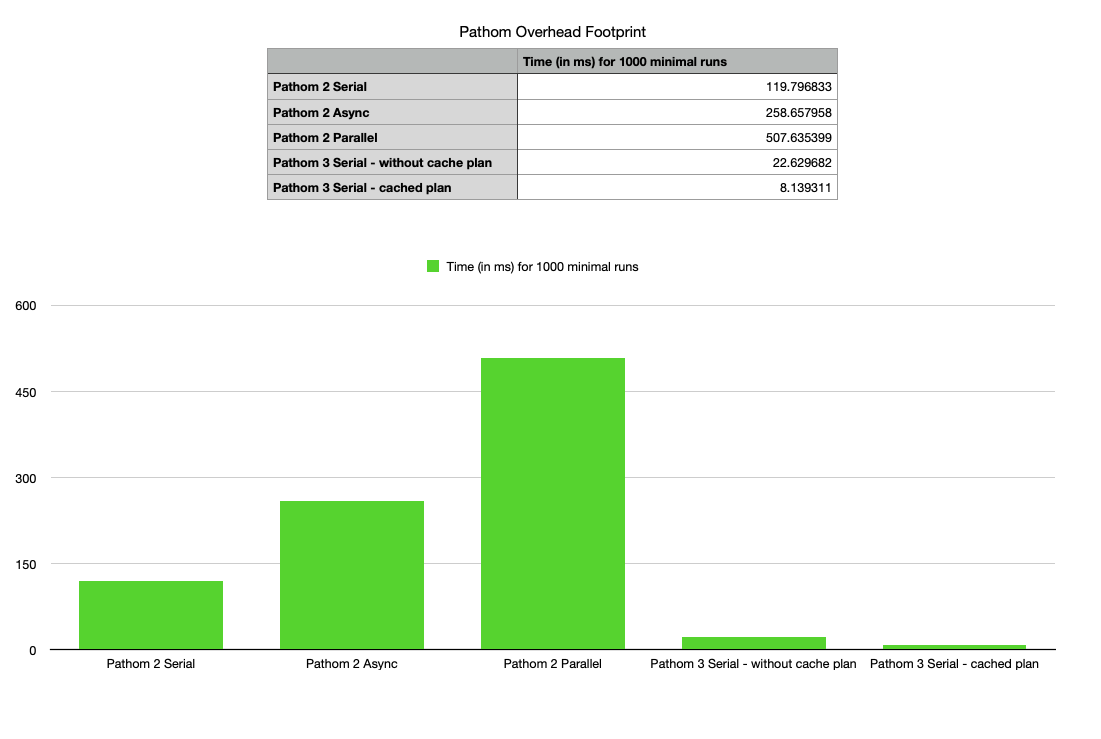 The Pathom 2 the overhead seems pretty bad, but consider that most of the current users use Pathom to wrap some external source (services, databases, etc…), and these resolvers tend to be bulky, making the Pathom overhead not to be a problem when sided with it.

But with the new performance, Pathom starts to be a good option for more internal lightweight processes, like creating compatibility layers, aliases, and other general processing.

The gains come from removing the reader abstraction and simplified constructs.

You can find the code for this benchmark in this gist.

In Pathom 2, the connect namespace got too big and contained large macros that take long to compile. The users pay this price, even when not using any async features.

Pathom 3 considers this problem and has more distributed and smaller namespaces. Also, the async parts (yet to be done) will be in separate namespaces.

In Pathom 2, EQL was the only way to use the resolvers. In Pathom 3, it’s one of the options, along with Smart Maps (more on it below).

Without the parser abstraction, Pathom uses the environment directly, which is the common pattern between the interfaces.

A smart map is a custom map type that uses resolvers to realize data as the program asks for the attributes.

Here is an example of what a Smart Map usage looks like:

I’m excited to see what usages you will come up with for Smart Maps!

But implementing a dynamic resolver in Pathom 2 requires a ton of internals understanding, and the resulting algorithm adds considerable overhead.

One common challenge is that dynamic resolvers require multi-attribute planning to be efficient.

Consider the following EQL query that uses an integrated GraphQL resolver from Github.

Remember that reader2 and parallel-reader use a planner that only plans for one attribute at a time. If Pathom naively uses that, it would mean that the previous query would make two separate requests, one for login and another for the name, and that’s is not what it should do:

Instead, it should group the max number of properties it can and make a single request to the GraphQL service, as:

To do that, Pathom needs to consider multiple attributes of the same request, and the GraphQL resolver implementation does that; it looks for the parent query and finds all relevant attributes.

But just looking at the query is not enough. That’s because the query may have attributes that are not directly from the GraphQL server, but have a dependency on it. For example consider this setup:

Note that in this example, the optimal approach still queries Github once asking for the login and name, but to realize that Pathom has to plan for every attribute once, just to find out about this dependency.

In Pathom 2, all of this is done at user code land, and to aggravate this problem, in case you have multiple resolvers like these, each one will repeat this planning operation for every attribute, which gets slow.

Now that the new planner already considers many attributes simultaneously, a lot of work of figuring what to call from dynamic resolvers is realized by planner code instead of user code.

This allows all the planning to happen in a single pass of the query.

What writing these resolvers look like is still under development; a current dynamic resolver that already leverages this planning is the Datomic integration.

You may have watched my last talk at the Conj, there I talk about the Maximal Graph idea, to connect distributed Pathom parsers.

This new planner is a start to make that vision happen, Pathom currently has some features that allow for that, but this part of the library needs more development.

In Pathom 3 I’ll embrace the model of Open Tracing instead of building a custom trace stack.

No code related to this was done yet. If you have inputs on this, please ping me up!

The tools will need some porting code, the query runner can still mostly the same, but the tracer is probably getting a new version that’s more aligned with the new planner and how Pathom 3 runs.

The good news here is that resolvers have a close interface from Pathom 2 to Pathom 3, and automating the conversion is easy to be made for most cases.

The trick part is for users making extensive use of readers and plugins, the plugins are likely to have different entry points in Pathom 3, and how to port is uncertain at this point.

I would love to hear some user feedback once plugins start to get shaped in Pathom 3 to think together on ways to minimize the burden of porting.

You can find Pathom 3 source code at https://github.com/wilkerlucio/pathom3.

This is a work in progress, don’t use.

If you like to collaborate in the development or play a bit with it, you can use it as a deps dependency.

Most essential features from Pathom 2 that still need to be implemented in Pathom 3:

That’s what I have for today; I’m excited to keep working on this. If you have questions or wanna chat about any of this, this is a great time to bring new ideas to Pathom; you can find me at #pathom on Clojurians.

If you like to learn more about Pathom in a daily journal, check my Roam wsscode.